Food and Wine: Why Factor’s Famous Deli’s 70th Anniversary Means So Much

Factor’s Famous Deli, an iconic Los Angeles restaurant that’s celebrating its 70th anniversary this month, is an institution that always has an eye on adaptation.

“See the shine on it?” Debbie Markowitz Ullman asks as she brings over a plate of glistening and luscious hand-cut pastrami. “It’s because it’s slow-roasted for four to five hours, and that’s what made all the difference in how the texture is.”

Factor’s, which was opened by Abe and Esther Factor, has been at the same Pico Boulevard location since 1948. Debbie’s father, Herman Markowitz, purchased the deli in 1969. About 80 percent of its customers are regulars, including families that have brought a fourth generation into the restaurant. The core of the business, obviously, is classic Jewish deli food. 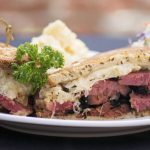 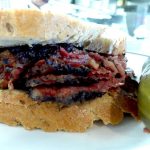