Entrepreneur Gary Winnick told us about the now-defunct Pastrami King in Manhattan, which he thought served the best he ever tasted, and how he now has his New York driver stop at Pastrami Queen on the way to the plane at JFK airport to pick up a few snacks. (He was once barred from boarding his plane because the aroma from the bag was too strong, but that’s another story.) Kolikof Caviar’s Jim Miller said that he had a sensational pastrami sandwich just this week from Greenblatt’s on Sunset Blvd. My brother Stan, recently back in L.A. from an extended stand in France, merely salivated as he listened. Then I ended the discussion with one word…Langer’s. 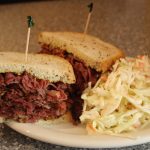