Los Angeles Magazine: A Lot of the Best Pastrami in Town Comes from This One Supplier in the Valley

Our thanks to Jason Kessler for a great profile piece on RC Provision in the current edition of LA Magazine:

The Valley has long been known as a home to film studios, but there’s a different kind of producer of megahits in the area. Since the late 1950s, commercial meat processor
RC Provisions has been quietly making some of L.A.’s favorite cured meats.

The pastrami at Langer’s? It’s actually made by RC. Same goes for the smoked brisket at Canter’s, Brent’s, Nate ’n Al’s, and almost every well-known deli around town. RC also produces the chili that tops the famous burgers at Original Tommy’s and Pink’s Hot Dogs. Even the capocollo on The Godmother, the iconic sandwich at the beloved Bay Cities Italian Deli & Bakery in Santa Monica, comes out of RC’s nondescript plant on the corner of Victory and Burbank boulevards, across from Costco. “We pretty much own the town in the deli-meat business,” says 48-year-old owner Matt Giamela. 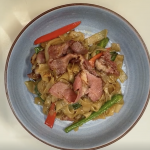