Niko Klein of The Loyolan, the newspaper of Loyola Marymount University in Westchester, has penned a great new article featuring his three favorite pastrami locations in LA – all of which happen to be RC Provision clients: Nate ‘n Al’s, Factor’s, and Langer’s.

Los Angeles didn’t invent the Jewish deli, though we have adopted it and perfected it. The birthplace of the classic Jewish deli is New York, specifically the Lower East Side, which was an immigrant hub at the dawn of the twentieth century. Nineteenth century German immigrants brought the idea of the Delicatessen to America, and Jewish immigrants later borrowed the idea in order to provide a kosher offering to the growing Jewish population in The Big Apple. While European Turks had created meats similar to pastrami in centuries past, the pastrami we know today was an American Jewish invention upon coming to America and encountering previously untold quantities of cheap beef. According to the documentary “Deli Man,” the Jewish deli is on the decline, with thousands in New York in 1931 and now only 150 in all of North America. This astonishing statistic proves Los Angeles to be nothing less than a hub of the Jewish deli, with over ten in the city.

Categorized by seemingly endless menus and even more mouthwatering delicacies behind a glass deli counter, I’ve decided to stick to these two classics: a pastrami on rye and a cup of matzo ball soup. While some people may claim loyalties to their Reuben sandwich, potato knish or corned beef sandwich, a great Jewish deli relies on its high-stacked pastrami as a benchmark. Any fan of Seinfeld will remember George’s love interest, Vivian, claiming “I find the pastrami to be the most sensual of all the salted, cured meats.” I have to say I agree. If you’re willing to spend upwards of $15 on a sandwich, there’s hardly anything that quite satisfies a lunch hunger like hot pastrami stacked high on seedy rye. 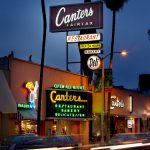